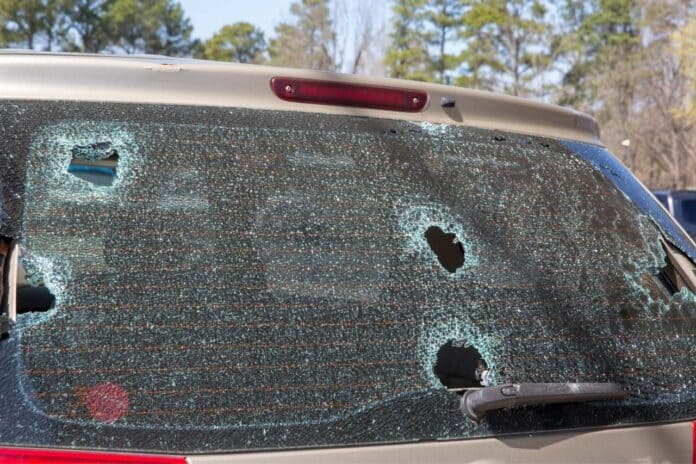 In this post we discuss how much does hail damage devalue a car. Hail is the frozen rain particles containing ice and snow. When it falls on the cars, it causes damage, especially in most cases they cause dents. Hailstorms occur significantly due to the weather changes during the summer and spring seasons.

Heavy and severe hails may cause extensive damage to the car. Due to these damages caused by hail, the vehicle’s value drops down. The severity of the injury depends on the type of the car and how severe the hail had hit the car’s surface.

We know that accidents are the main ways where vehicles often get into trouble. Through accident, the vehicles get deformed and scratched. But this article will discuss the damages caused to the vehicle by hail. Before looking into the damages caused to hail, let’s look at the types of hail. To acquire more knowledge on it, read the article further.

The Types of Hail

The more giant hailstones will cause severe damage to the vehicles. Some classify it as rain, drizzle, ice pellets, hail, small hail (snow pellets), snow, snow grains, and ice crystals.

The Types of Hail Damage On a Car

A hail can damage your vehicle more ways than one. Here are a few.

Here, the damage is caused due to tiny hailstones which have affected the surface, causing a small dent, but there is no damage to the paint. The paint is not scratched.

We can repair this type of mild dent caused by hail by reaching a known mechanic using the paintless dent repair method. Also, the mechanic needs to possess the skill of taking out the cuts and making the car back look as it was before.

It cannot always be true that tiny hailstones cause only mild impairment. Sometimes the tiny hailstone will also cause heavy damage. In this case, the damage will mostly appear on the car’s exterior.

And the paint on the body is scratched. So here, the owner should repair the exterior part by replacing a new body panel, and he should also consider the paint that is selected as that has to be of a similar shade that was already there.

Here, the damage to the car caused by the hailstones is extreme, but that has not scratched any color from the vehicle. So, we can use paintless dent removal to treat the car, but if the damages are too severe, they should treat the vehicle very carefully and professionally.

This hail catastrophe is the worst case where the cost to repair the car would be extremely high. Here severe hail damages the car’s exterior, and the paint scratches. To fix this, the owner should replace the exterior panel with a new one and also has to repaint them.

Here, the cost might sometimes exceed the car’s value; hence in this situation, the insurance company might not also come forward to help; instead, they would say the car is unrepairable.

These damages weaken the car’s appearance; hence, it has to be repaired by professional mechanics to gain sound quality. Even if you want to resell the damaged car, you must fix it before selling it because the damaged vehicles will not rate for reasonable or profitable prices.

How Much the Hail Damage Reduces the Value of a Car?

The hailstorm could cause both exterior and interior damage; external damage caused to the car result in dents and scratches. Some severe cuts will damage the car’s outer surface, while significant and severe hail storms may damage the car’s interior.

Breaking glasses, the head, taillights, and the pressure due to hailstorms could deform the vehicle’s structure and loosen some car components. Although the owner repairs hail damage, the car won’t ideally get back to its initial quality, so its value might drop. during severe hailstorms, the damage will be heavy. The cost of repairing would be higher than the value of the car.

We now know that a hailstorm can damage the car, and as a result, the value of the vehicle reduces. To prevent this from happening, we must take some safety measures so that the hail cannot directly get in touch with the car. Next, let’s see the safety protocols that we would take to protect our vehicles from the hailstorm.

Protective Measures to Prevent Your Car from Hail Damage

If You Are Searching for A Branded Car at a Budgeted Cost, Here’s an Idea!

The hail-damaged cars are sometimes unrepairable, and the insurance company will also total the vehicle. In this case, the value of the vehicle will decrease. If you want a branded car for a lower budget plan, then for a hail-damaged vehicle if the damages have not affected fuel consumption, speed, comfort, and other primary aspects of the vehicle.

But also be smart enough that some severely damaged cars with shorter lifespans will not be helpful. Hence the lifespan of the vehicle should be mainly considered when purchasing.