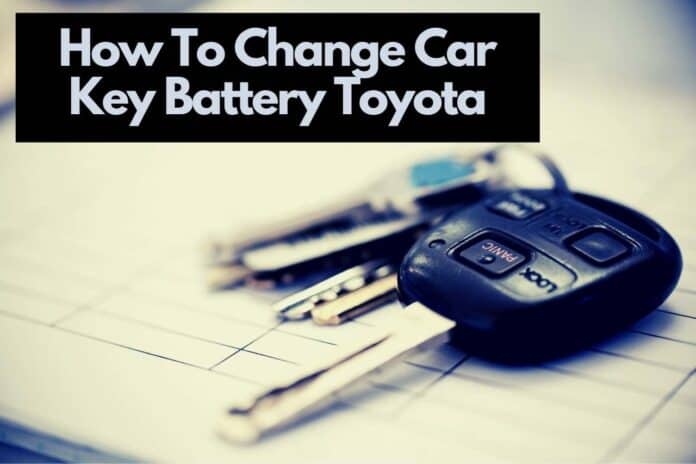 Life does not always go as planned, and you may be left with such a non-functioning or lost Toyota key fob. Toyota has always been in the vehicle business for a long time. It has never stopped improving and maintaining its position. Despite the influx of new car brands and models, Toyota can keep its position as one of its top automobiles. Now you might be thinking about how to change car key battery of Toyota?

So how to change the car key battery of Toyota vehicles? When the Toyota key fob battery stops working, you must open the casing to see what type of battery is inside.

You may access your key fob case in newer Toyota vehicles by unfolding the concealed key and inserting it into a hole mainly designed to expand the case. In earlier Toyotas, you’ll unlock the case by inserting a thin item inside the case and prying it open where you notice a prominent notch.

The following are the steps for replacing a Toyota key fob battery:

How Long Before Car Battery Dies With Radio On? Here is the answer.

Although the general steps get mentioned according to the Toyota models, the steps are given below for how to change the car key battery in different Toyota models.

Innovative Key technology gets currently used in the majority of Toyota vehicle models. For most automobiles and vehicles, it gets referred to as keyless entry. Toyota Prius is such a Toyota vehicle that employs this technology.

Let’s have a look at how the Toyota Prius replaces its car key battery below:

The instructions for the Toyota Camry are almost identical to those for the other year’s models. It contains a digital display that will show you whether the battery is going low. If you see this, you must replace it immediately or risk leaving the critical fob dead for an extended period.

Here’s how you do it:

Why Is Driving on An Expressway Is Different? Read here.

One of Toyota’s most famous automotive models is the Corolla. You must be one of many Corolla owners, and one of your issues must be changing the vehicle key batteries.

When replacing a battery, make sure the positive side is facing up. You can reassemble the unit in the other direction.

Here’s what you can do to help your Toyota Yaris:

It would also be simple if the problem were a vehicle key battery. After you’ve finished replacing your Toyota key fob, test it by trying to open the vehicle and restarting the engine. If the problem persists, you may need to re-adjust the batteries to verify that the connections are clean.

If you lose the entire key fob, you will need to replace it, and your Toyota dealer may be able to replace the fob as a complete.

How Much Does A Riding Lawn Mower Weigh?

How Much To Lift A Truck – Comprehensive Guide