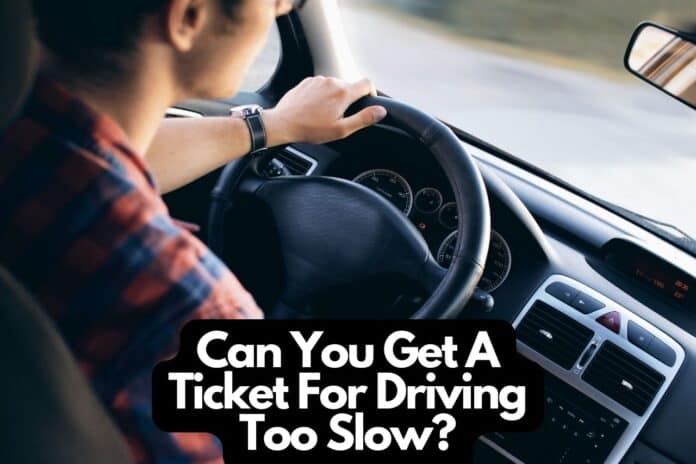 Although traveling too quickly results in the majority of speeding fines, going too slowly can also result in a penalty in New York. Most of us generally picture older people, inexperienced drivers, or visitors trying to figure out where they are or which way to go when thinking of sluggish drivers. So can you get a ticket for driving too slow?

The violation of Article 30, section 1181, is driving too slowly. For this offense, there are two subsections where the main one is, VTL 1181(a) Driving Too Slow is the first (impeding traffic). This is issued on most roadways when a driver’s speed obstructs traffic.

Even though these tickets are not frequently given out, it is nonetheless crucial for drivers to understand what they entail.

Does Your Car Shakes When Driving Over 70 Mph? Read This To Find Out Why

A citation for driving too slowly, which can create a hazard by obstructing traffic, is the reverse of a violation for speeding. An officer typically gives out this ticket if a car moves slowly outside the right lane. A vehicle driving slowly should be in the right lane or a lane set aside for them.

The prosecution would have to prove that you didn’t drive as close to the right edge of the road as you might have without driving slower than the average traffic speed.

If your state employs an absolute limit, another strategy to challenge this kind of penalty is to demonstrate that you were moving at the posted speed limit. Even if you were considerably below the limit, you might be able to claim that the road or the weather made it hazardous to go any faster in the given situation.

Can You Get A Ticket For Driving Too Slow and Not Using Use Turnouts?

When you consider the question, “can you get a ticket for driving too slow?”, It is customary for a motorist who is moving slowly and has a line of traffic behind them to pull into a turnout so that the other cars may pass. An officer may issue you a penalty if you fail to utilize a turnout.

The prosecution would have to prove that you were traveling slower than the average speed of the traffic surrounding you on a two-lane road (one lane in each direction). The number of cars that slowed down due to you must have been at least a specific amount.

You must have overlooked a pullout that was open and secure to utilize when you failed to stop there.

Some motorists feel that if the road was in bad shape or the weather was awful, they shouldn’t have received a ticket for this infraction. This defense will typically fail, though.

Why Is It Harmful To Drive Slowly?

Driving slowly can also prevent the vehicles behind you from seeing your car in time to slow down appropriately since they are moving quicker than you are. The result might be a rear-end collision that could have been avoided if you had sped up or moved over to the far right lane. This is where the question, “Can you get a ticket for driving too slow?” mainly applies.

Additionally, other cars frequently view slow-moving drivers as a nuisance, which can easily cause road rage. The Zebra reports that “road rage for killings and injuries over the seven years is 200 and 12,000 respectively.” Now, you wouldn’t want to be the one to start that.

Can You Get A Ticket For Restricting Traffic?

Driving too slowly in the right lane or on a one-lane road and obstructing traffic is an alternative to this infraction. Suppose you drove below the average and acceptable pace of traffic, and this reduced speed was not necessary for safety reasons or the slope of the road.

In that case, an officer can typically issue you a citation for this infraction. You can contest this infraction by demonstrating that you were adhering to the official speed limit or that it was risky to drive faster in the given conditions. The fact that other cars passed you while you were going the speed limit does not justify giving you a ticket because other drivers were breaking the law.

The motorist may point out that the surface is uneven, that fog is drifting across the road, or that there are several steep hills or abrupt turns, while the officer may claim that there is a long line of traffic behind the car.

Discouragement of driving slowly may seem paradoxical, yet there is a good reason for it. When most drivers are traveling at roughly the same pace, roads are at their safest. At best, a car traveling far more slowly than the flow of traffic can be an annoyance; at worst, it could be an accident waiting to happen. The former is emphasized in VTL 1181(a). It is meant to deter motorists from obstructing lanes and creating unneeded traffic.

A stated minimum speed acts as a safety measure on key roadways. For instance, a driver traveling 35 mph on a route where the majority of drivers travel at 65 mph (or more) poses a significant risk.

What Consequences Can Too Slow Driving Cause?

In contrast to speeding, speed does not affect a penalty for driving too slowly. That does not, however, imply that the ticket price will be low. VTL 1181(a) and 1181(b) each carry a maximum $150 penalties in addition to a required $88–$93 NYS surcharge.

Furthermore, each is a three-point offensive. For a second infraction within 18 months, the base punishment increases to $300; for the third offense within 18 months, it rises to $450. Like many other traffic infractions, a conviction for driving too slowly may impact your vehicle insurance.

What Should You Do If You Receive A Speeding Citation/Ticket?

You must immediately contact an expert attorney if you or a loved one has received a ticket in New York for prolonged driving or any other speed-related violation. You can only escape high fines, points, or other consequences by contesting the ticket.